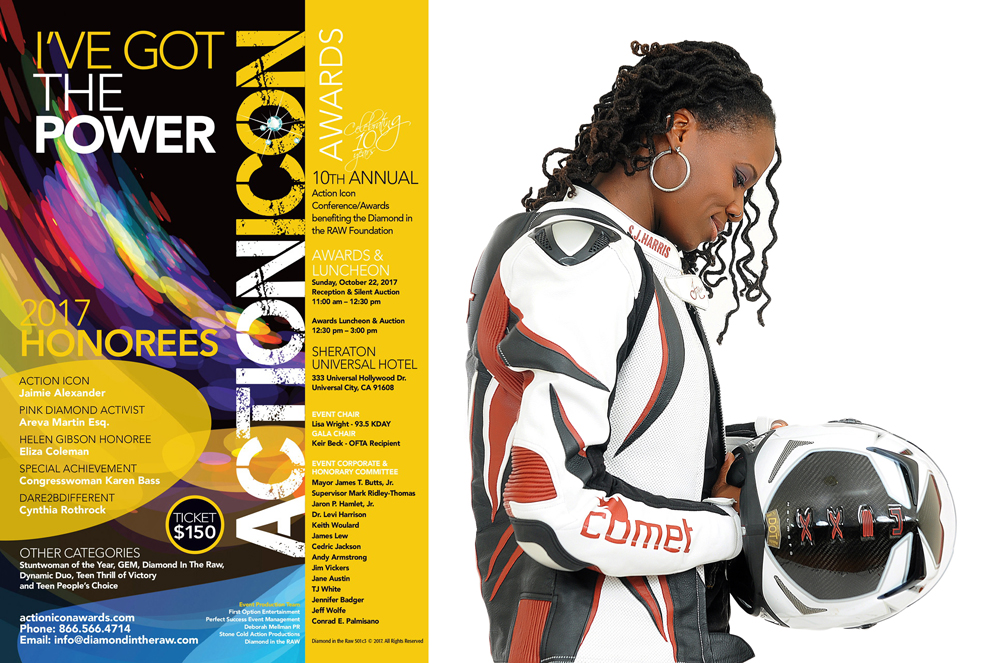 September 14, 2017, Los Angeles, CA – The Diamond in the RAW will host its 10th Annual Action Icon Conference and Awards on October 18-22, 2017. The four-day event is packed with action-oriented seminars, stunt demonstrations, rigging techniques and top of the line stunt coordinators. The conference will close out with a VIP luncheon and awards reception. Both the conference and awards are attended by A-list action stars, Olympic athletes, extreme sports enthusiasts, keynote speakers, panelists, honorees and presenters from the entertainment industry.  The Action Icon Awards will be held on Sunday, October 22nd at 11:00 AM – 3:00 PM at the Sheraton Universal Hotel, 333 Universal Hollywood Drive in Universal City. There will be a red carpet, silent auction, reception, luncheon and award ceremony honoring the unsung heroines behind the scenes; stuntwomen, entertainment professionals and women who Dare to Be Different.

The Action Icon Awards and Conference are designed to prepare, educate and discipline female stunt performers to be competitive in an industry favorable for their male counterparts. “In today’s industry, the imbalance of jobs based on gender is startling, both in front of the camera and behind the scenes. That goes especially for women of color,” says LaFaye Baker, veteran stunt woman and executive producer of the Action Icon Awards and Conference. “Overall, male performers receive a vast more career opportunities than their female counterparts thus creating an atmosphere of discrimination, aging women out of the business at 40, while men are still working well into their 60’s.”

Joi “SJ” Harris will receive posthumously the Diamond in the RAW award for being the first African American Road Racer. She lost her life while working on the movie Deadpool 2.  SJ’s Threader24 Racing Team will be on hand to accept the award on her behalf.  This year’s honorees include actress Jaimie Alexander from “Blindspot” and Thor: Ragnarok (Action award); Areva Martin, Esq. (Pink Diamond Activist award), Eliza Coleman (Helen Gibson honoree), Congresswoman Karen Bass (Special Achievement award), Queen of the Martial Arts Cynthia Rothrock (Dare2BDifferent award), and many others.

All Riders are welcome to attend this event in honor of our fallen legend.  We will meet at 9am sharp for a memorial ride from the 76 Station on 4000 S Figueroa St, Los Angeles, CA 90037 to the Sheraton Universal Hotel.  There’s no cost to join the ride.  To attend the event, tickets can be purchased online at diamondintheraw.com.

About Diamond In The Raw: Diamond In The Raw is a 501 ©(3) non-profit organization dedicated to empowering and transforming the lives of foster care and at-risk teen girls between the ages of 12-18 through S.T.E.A.M. (Sciences, Technology, Engineering, Arts, Mathematics.) The organization specializes in mentoring, leadership, education, business etiquette, scholarships and providing pertinent information about exciting career options behind the camera.  Celebrating their 10th year, Diamond in the RAW has many success stories. Through their programs on everything from human trafficking to how to land a job as a stunt coordinator, the organization has helped young women shape, prepare and define their careers in the entertainment industry and Corporate America. Some of them have graduated from esteemed universities, while others have secured careers behind the scene, as a camera operator, marketing coordinator, make-up artist, fashion designer, fashion assistant to the stars, production assistant and publicist. The goal is to not only empower these young bright minds, but the more women there are in the industry and stunt community, the more likely they are to hire other women for the job.