Richard Rawlings, along with his crew at Gas Monkey Garage, today announced a partnership with Polaris Slingshot that will showcase Rawlings’ personality through a one-of-a-kind custom build and five-part video series. Known for his creative vision and intense drive to customize vehicles and machines like never-before, Rawlings will modify his personal 2021 Slingshot to
exemplify his boundary-pushing, outgoing personality.

“Half the fun in owning a Slingshot is customizing it and making it your own,” said Rawlings. “For us at Gas Monkey Garage, we put a build plan together that will allow us to get after it and have some fun. Because that’s what Slingshot is all about – personalization through customization.”

“We’re excited to partner with Richard Rawlings and Gas Monkey Garage, as they’re an authentic representation of our brand,” said Chris Sergeant, Vice President of Polaris Slingshot. “Slingshot is a statement-maker in and of itself. Our owners, including Richard, take it to the next level and leave no stone unturned when customizing. They personalize every detail, and each Slingshot becomes a canvas of our owners’ self-expression.”

Starting at $19,999, the 2021 Slingshot lineup features four models – each available in a manual or AutoDrive transmission. With an open-air cockpit and side-by-side seating, the three-wheel Slingshot turns weekend getaways into unforgettable experiences. Its head-turning style demands attention at every streetlight, while a complete line of accessories, including added storage, color-painted accents, and more, allow drivers to personalize their ride straight from the factory. 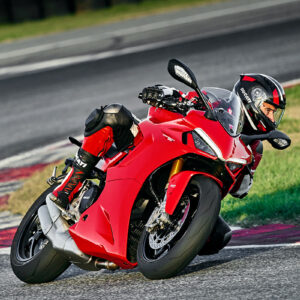 Presenting the Multistrada V2! The Ducati Multistrada family continues its evolution with the presentation of the new...