With style and grace, Marian “Ms. Showtime” Peterson has paved the way on the streets of Los Angeles, CA since 1971.  Because of her, women ride with our heads held high.   She serves as the only female member and Road Captain of the all-male club, The Magnificent 7 MC.  In January, she celebrated her 70th birthday, still on ground.  Ms. Showtime has fully achieved icon status, and was recently awarded the “Bessie Award” at the 2nd Annual Running The LAW Ladies Annual Weekend.  In recognition of her contribution, she was awarded one share of Harley-Davidson Stock. We are honored to hear from Ms. Showtime about her bike life on the set, in her own words:

“I can remember all my life, having “boy” toys, hating boring “girl” toys.  Betsy Wetsy was the top of the line doll in my days.  You put the baby bottle full of water in Betsy’s mouth, and the water would come out her bottom.  Yay!  Now you can change her diaper.  It didn’t impress me at all.  I wanted a train set for Christmas.  My mother got me the biggest train set on the block.  This let me know it was alright to play with “boy” toys or have a “male” career.

Back in the 60’s, I had a 550 Honda. I’ve always been an adrenaline addict.  I remember my first bike.    I learned to ride it at a park, going round and round on the grass.  Once I caught on, I took to the streets.  I’ve always been a daredevil; I should have been a racer.  I love speed for some reason.  I was always racing my horse.  I owned a golden palomino stud horse, back then.  So, I would ride my bike to the horse stables.  One day at the Horse stable my Clutch… I did a wheelie straight down the alley, and controlled it to my surprise.  Everyone thought I did it on purpose. 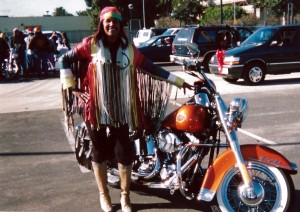 In the 70’s, I got a 750 Honda.  I would open it up all the way just for the thrill.  I had a thing about challenging myself, flying through traffic, shocking people when they saw it was a girl riding.  In the 90’s, I got my 1973 1000 cc Harley Sportster, that was the ultimate.  I would ride to work at Northrop Aircraft.  All I could think of was getting off work, so I could jump on my bike.  At work, I remember one guy telling others how I left the pack I was in and caught him.   He said if I looked like I was going to pass him, he would have slapped me off my bike.  I just laughed.  I had this thing about no one is going to pass me.  Or, if I saw another bike or bikers way ahead, I had to catch them and pass them with great speed.   I remember riding with the Choppers MC on our way to Fresno.  This lone biker passed the pack.  Here I go, doing my thing…by now, everyone knew my thing, I had a reputation on the set by now.  Anyway, I left the pack and took after this young biker, who was splitting lanes on this smaller bike.  I’m going to show him, even though, I’m on this big Hog – a Harley Softail Heritage, I can split lanes even faster.  So, I pass him as if to say, “Keep Up!”  And sure enough, he backed out.  So, I punked him.  I got a big thrill punking people.  To my surprise, here comes this guy again, this time in the slow lane.  I’m in the fast lane.  He looks over at me, jumps on his seat with his knees, then jumps off his bike and is sliding on his two feet next to his bike.  He’s steering the handle bars with his hands.  He looked over at me and threw one leg sideways up in the air.  He was saying “Now can you do this?”  I wanted to let go of my handle bars and salute him.  I slowed down and dropped back in the pack.  When we made a stop, all of the guys said I made him come out with his big guns on the highway.

I was always calling the brothers out or just plain out-riding them.  Not all of them, but enough to make a name for myself.  To this day, I never clowned or loud talked any of them.  I would just do my thing and that was punking you out on your bike.  That was my own self gratification.  Guys started respecting me because I respected them and myself. I was still a lady with it.  Guys started bragging on me after a while.  If you got beat by Ms. Showtime, it wasn’t like you got beat by a girl.  It was Ms. Showtime.  They saw me as exceptional.  They even started sicking me on people. 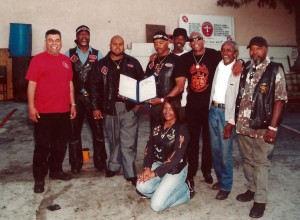 I would have to give the Chosen Few MC OGs a special thanks for making me their baby sister back then.  They took me up under their wing and I rode in their pack.  One year, I ended up leading them on a ride because different bikes in front of me kept pulling out of the pack.  I was so proud that day!  My chest was out, as I was riding.

I remember riding with two veteran riders at midnight leaving the (Chosen)Few clubhouse and going to the LA Defiant Ones MC clubhouse.   Freddie G, Skinman and I were at the light.  The light turned green and we took off racing; them on their hogs, me on my sportster.  I whipped them real good, right in front of the LA Defiant Ones.  Everyone was out there yelling in dismay.  I got off my bike and said quietly, “I was just trying to keep up.”  On the inside, I was screaming, “I whipped them!”  I would ride anytime and any place.  I got up one Saturday morning, put on my gear… I kept my sportster in the living room back then.  I opened the door and it was raining hard.  I got on it anyway and rode down to the Chosen Few clubhouse.  Everyone was up under this tarp, and they looked at me like I was crazy.

Another time we were flying on the freeway, coming from a dance.  My partner Jerry went on the other side of the the divider, so I went the same way.  I did not clear it and the bike flew straight up in the air.  I came completely off the bike.  The tips of my fingers were the only thing touching the handle bars.  I grabbed the handle bars , the bike cleared the whole divider, came down on the other side, and I came back down on the seat.  People probably thought I was trick riding.

One year, we were on the highway and I got Big Headed and split a lane at a slant.  I got hung up on this car with my crash bars.  The people in the car looked at me and I’m looking at them going around 110 miles an hour.  This car was in the diamond lane, and put on breaks… the bike went forward like it had been shot by a rubber band.  I thought I was going to clear the car, but my rear crash bar caught the bumper of the car and it turned my bike into the fence, doing a high speed wobble.  I kicked my left peg down and gave it gas and barely missed the fence.

I stayed on my bike so much, one day I forgot to pay my light bill and I had the money!  I had a ramp on my front porch so I would just ride my bike straight into my living room.  The lights were out, and I couldn’t get them turned back on until Monday.  This was Friday.  I didn’t care.  All weekend, If I needed light, I used my sportster to light each room in the house.  Wherever I needed light, I would roll my sportster and point the headlight toward the room.

A few times, I almost ran into my TV with my bike.  Sometimes, when the ramp would be wet from Dew, I would fly into the bushes with the bike on top of me.  The neighbors would come out at 2 or 3 am and help me out. 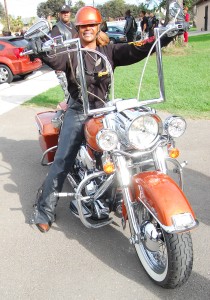 One of my biggest accomplishments as a motorcycle rider was when 50 Plus voted me into their club.  This club is made up of 30 different clubs, all men, and they did not allow female members.  But they made an exception for me.  I made history in Los Angeles, when Magnificent 7 MC was formed in 1961, just after the Chosen Few MC.  An all male club voted me in as the first and only female fully patched member of a male MC.  Because of my riding skills, I was named Road Captain.  I have currently maintained this position for 3 terms.  When I was first chosen as road captain, a lot of guys teased my members, but there’s one thing they all agree on… I am qualified.  Today, a lot of new clubs have female road captains and females in all positions, including presidents.  Yet, in 2015, you will not find any OG clubs with a female road captain.

Everything I know, the guys taught me.  I never would gossip to the women about what their men would be doing because they accepted me as one of them.  I would ride like them, sit on my bike like them and dress like them, but always in a sexy way.  The one thing I would tell any female on the set… the most important way to earn respect is to STAY A LADY.” 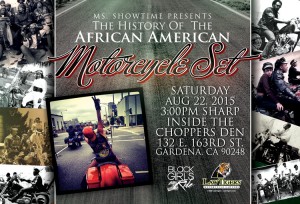 On Saturday, August 22, join Ms. Showtime for The History of The African American Motorcycle Set, a panel of bikers who started the culture on the west coast.  This event takes place inside The Choppers Den, 132 E. 163rd St, Gardena, CA 90248, 3pm Sharp.  Don’t miss this opportunity to get the history of the set straight from the source! 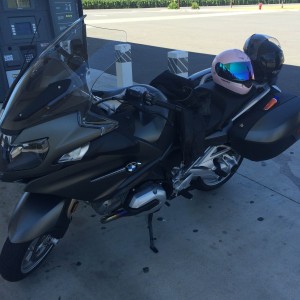 Generally, I'm a sport bike rider.  I started on a Kawasaki Ninja, and currently ride a Suzuki Hayabusa.  I've been contemplating...