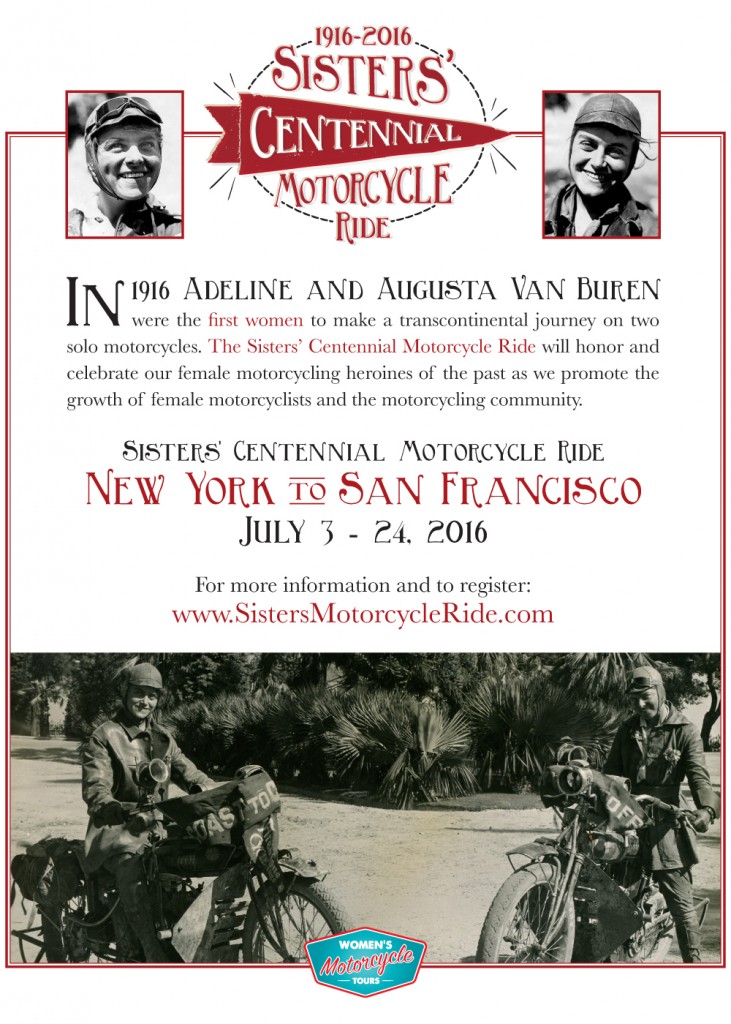 In 1916 Adeline and Augusta Van Buren set out to prove they could ride as well as anyone. With World War I looming, the Van Buren Sisters planned to show that women had what it took to be dispatch riders in the U.S. Army. They set off on their transcontinental journey on a pair of motorcycles. “This was a phenomenal accomplishment by two courageous women at a time when few roads were paved, Victorian attitudes were in full flare and women did not yet have the right to vote,” says Clickenger. “This ride is intended to honor their achievement and promote the growth of modern-day women motorcyclists and the motorcycling community.”

The Van Buren sisters became the first women to cross the continental U.S., each on her own motorcycle, and they were the first women to reach the 14,115 foot summit of Pikes Peak by motorcycle.  The sisters were inducted into the American Motorcycle Association’s (AMA) Motorcycle Hall of Fame in 2003.  The ride will loosely trace the Van Buren sisters’ 1916 route, primarily following the Lincoln Highway across the United States, from New York to San Francisco.  Combining Scenic routes and major metropolitan areas, the route will allow for great riding as well as promotion and visibility of female motorcycling role models.

Conceptualized by Clickenger as a way to highlight the “then and now” aspects of American two-wheeled travel, community events and meet & greets are planned across the country as a way of enticing not-yet-riding women to learn about the joys of motorcycling.  “I was a shy housewife twenty years ago when I started riding, and nobody would ever believe that about me now,” says Clickenger.  “For me, motorcycling has been an important tool of self-discovery and empowerment and every other female rider has a similar story of who she has become by learning to ride a motorcycle.  I want folks from across the country, from all walks of life to come out and meet us, hear our stories and hear about the history of women and motorcycling and be enchanted by the possibilities in their own lives.”

Two charities will directly benefit from Sisters’ Centennial Motorcycle Ride registrations:
– Final Salute: a national women’s veterans’ organization which provides temporary and permanent housing for the over 500,000 homeless female veterans in the United States.
– Women’s Coalition of Motorcyclists: Providing funding for motorcycle train-the-trainer scholarships that will help enlarge the number of female motorcycle instructors and coaches for road, dirt and track. (www.wcm2020.org)

The event concludes with a large group ride into San Francisco on July 23, 2016, where festivities will celebrate the ride’s completion and all riders’ accomplishments.  Women have several options for participation, including a fully supported tour and self-guided tours of the entire route or individual segments.  Find out more about the ride at www.SistersMotorcycleRide.com and learn more about the Van Buren Sisters and their history, visit www.VanBurenSisters.com.

Porsche Taylor and Sarah Moreau of Black Girls Ride Magazine will join 100 women on the Sisters’ Centennial Ride as guides for the full ride, from New York to San Francisco.  We are honored and excited to travel with Alisa Clickenger and her team!  We invite all of our readers to join us for this historic celebration in honor of the Van Buren Sisters, who paved the way for all women who enjoy cross country riding!

Amazing women doing amazing things. I wonder what was the reaction when they pulled up at a “filling station”

This is so awesome! 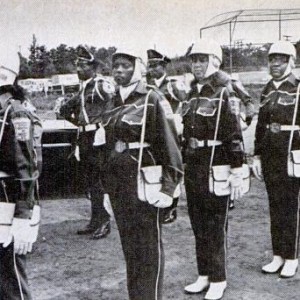 In 1958 Delores Davis was a motorcycle enthusiast who approached The Motor Maids of America for admission to their club....