My Experience at an Advanced Riders Course

BGR friend Becky Tarts gave us a glimpse into an Advance Riders Course she took and gave us some good reasons as to why every rider should continue their education even after years of pounding the pavement. Read her experience below! 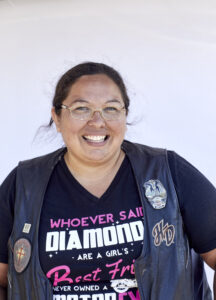 Hi. My name is Becky and I have a motorcycle problem. I have a need to ride far and ride often. Unfortunately, with that need comes the reality that after so many miles going straight you have a tendency to fall into bad habits, take for granted what a privilege riding motorcycles is, and sometimes even forget there’s danger out on the road. At least, I know that’s what happened to me.

When I was invited to take an Advance Motorcycle Riders Course I was happy to take the Monday off just to hang out with some friends doing what we loved. I had no idea I would actually learn something new. I’ve been riding regularly for five and a half years and put in over 1000,000 miles between two bikes.

What could some motorcycle courses teach me at this point? A lot. The answer was a lot.

At the Beautiful Bikers Conference and Rider Prep workshops, I’d sat through talks about the importance of taking riding classes over.  I’d also heard first-hand recollections of the dangers of the road, I had met motorcycle instructors, and had the opportunity to see and hear statistics. Through social media and motorcycle groups, you hear and read about people having accidents and being happy they had advance riding skills to avoid accidents. I just never thought any of that pertained to me.

The morning of the class arrived, and I was very happy to discover the Honda Riding Center was only a few miles from home. I left early, just in case there was traffic, and arrived at the center about 15 minutes early. I was happy to see my friend CaliCat was already there and shortly after Porsche and Michelle pulled up. We were escorted inside and treated to fruit and pastries and awaited the other class participants and instructors.

The people at the center were really nice and welcoming. After a short meet and greet, we were shown into the classroom and began work. We started out pretty basic, reading statistics, studying different pictures, talking about the benefits of different positions and ways of riding. The statistics were okay, but the facts were startling. I was really impressed with the speed to distance ratio formulas, I never thought about how much time it takes to stop, in terms of distance. Never really thought how just a few seconds of distracted riding could mean so much.

I’ve never been much of a classroom person. I prefer learning by doing. So when it was time to head to the track I was ready to get out there and put the ideas and lessons we talked about into service. The biggest challenge was how to get my bike up the slight curve and pointed in the right direction to make it to the track. The best part about an advanced course is that you use your own bike. Once the bike was on the track, it was time to gear up. We were told to bring jackets, wear boots, jeans without holes, etc. It was an unseasonably warm day, so I was happy to find out the center had long sleeve riding shirts in a variety of sizes to borrow. And if I didn’t have a bike they would have been able to loan me a bike as well. 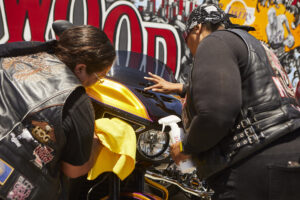 On the track, we worked on riding in straight lines, sudden stopping, swerving, delayed reaction stops, curves, and more curves. At first, following the cones was confusing but as the day went on you figured out where you were supposed to go and what you were supposed to do. The fact they had diagrams showing the pattern and one of the instructors demonstrated before we were sent out helped too. It was nice having two instructors watching and teaching. If one missed something you were doing incorrectly the other caught it and the show continued.

I don’t know how many times we went around that track or how many exercises we did. What I do know is it was great to have the opportunity to refresh skills I had forgotten and to learn more advanced moves than what I had been doing. On my ride home, I felt more confident as a rider and noticed more areas of defensive driving opportunities I hadn’t really paid attention to the years before.

I would highly recommend any rider to take an advance riding course. You may think you know all there is to know and have the certificates to prove it, but I think the longer we ride, the farther away from basics we get and the more attention really needs to be paid to where we’re going and how.

BGR got the opportunity to chat with the ladies of Cali Angels LAMC. So if you've ever wanted to know more about them, read...