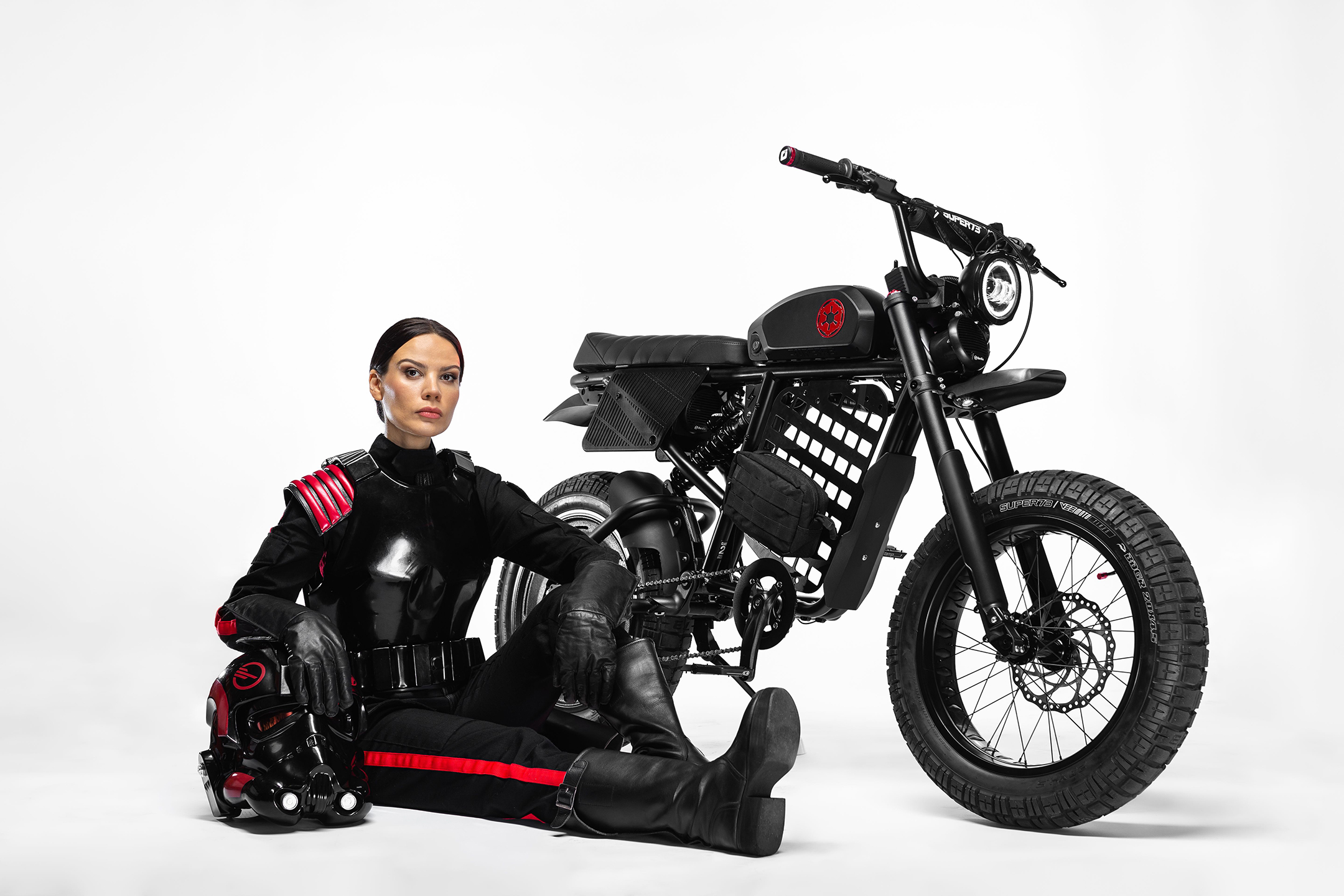 This bespoke SUPER73-RX® electric motorbike is built for actor and Star Wars fanatic Rahul Kohli, who is best known for his roles in iZombie and The Haunting of Bly Manor. SUPER73’s chief marketing officer, Michael Cannavo, said, “Rahul has been having fun with the Star Wars fandom since rumors about him playing a certain Jedi spread through the internet in 2020. That didn’t necessarily materialize, but it didn’t stop the Internet from fan-casting him in every new Stars Wars movie and show that’s coming. This bike is our way of showing we’re excited to see what he’s doing next, and we’re with him every step of the way!” 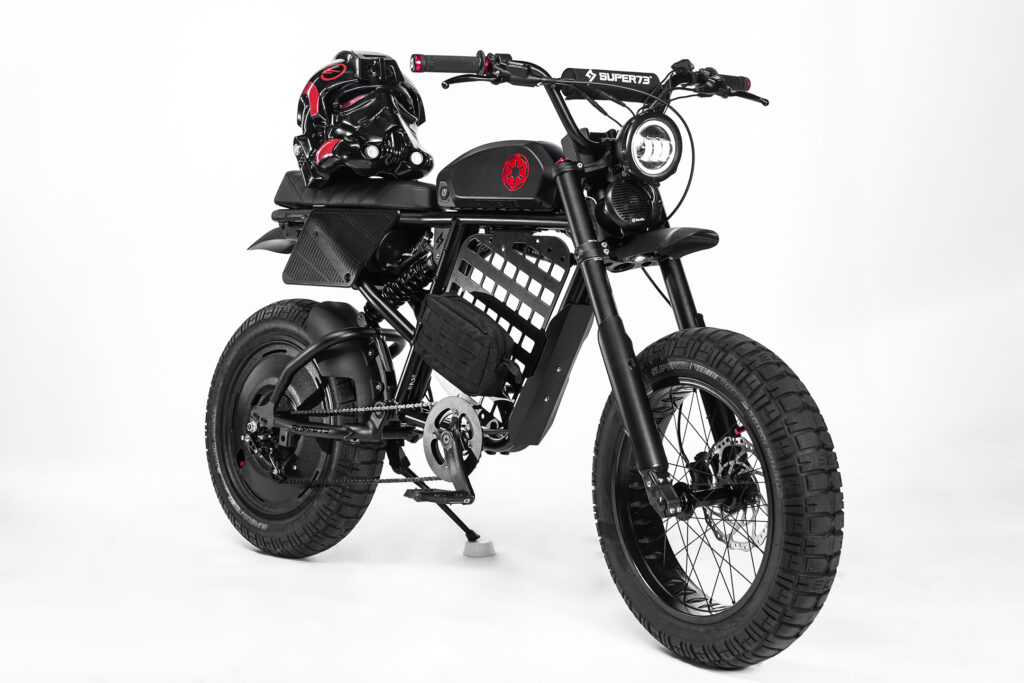 SUPER73® collaborated with Kohli to design a menacing, red-and-black e-bike that drew inspiration from one of the most iconic vehicles in the Star Wars world: the TIE fighter. To achieve this, SUPER73 painted the frame matte black, added metallic red “Imperial cogs” to the battery case, and installed red LED “underglow” lighting, with the wiring hidden in thick, Imperial-inspired looms. Additionally, SUPER73 installed Crankbrothers Stamp pedals and a pair of ODI lock-on grips, then reached out to Saddlemen Seats for a ribbed, full-grain black leather seat embroidered with Kohli’s initials and the roman numeral 13 – his favorite number.

The most impressive aspect of this custom e-bike isn’t its sleek, original design, but actually its lightsaber technology. “That’s not weird buzzword marketing,” Cannavo continued. “We connected with some of the top builders in the movie props business to obtain the advanced control board, motion sensors, and sound effects used by both Lucasfilm prop makers and diehard replica-collecting fans. Famous lightsaber prop installer, Jonathan Rossi, did the preliminary programming and SUPER73 lead engineer, Harrison Lu, ensured it communicated with the SUPER73-RX and was easy to use. Replica masters, Sabers Forever and Kyberphonics, came together to supply the two iconic sound fonts used for this bike.”

Additionally, Lu developed a 3D-printed housing for a “fighter pilot” switch to operate the LED underglow, and a large red button to activate a suite of Star Wars-inspired sounds that play through speakers installed on the front and rear of the SUPER73-RX. When Kohli presses the horn button, it emits the sound of laser blasters being fired from a Speeder bike. And when he holds the button, it emulates the vehicle shifting, accelerating, and changing gears. When the button is pressed in another way, the bike switches to “Podracing mode,” playing iconic sounds and dialogue from the LucasArts Star Wars Episode 1: Racer. 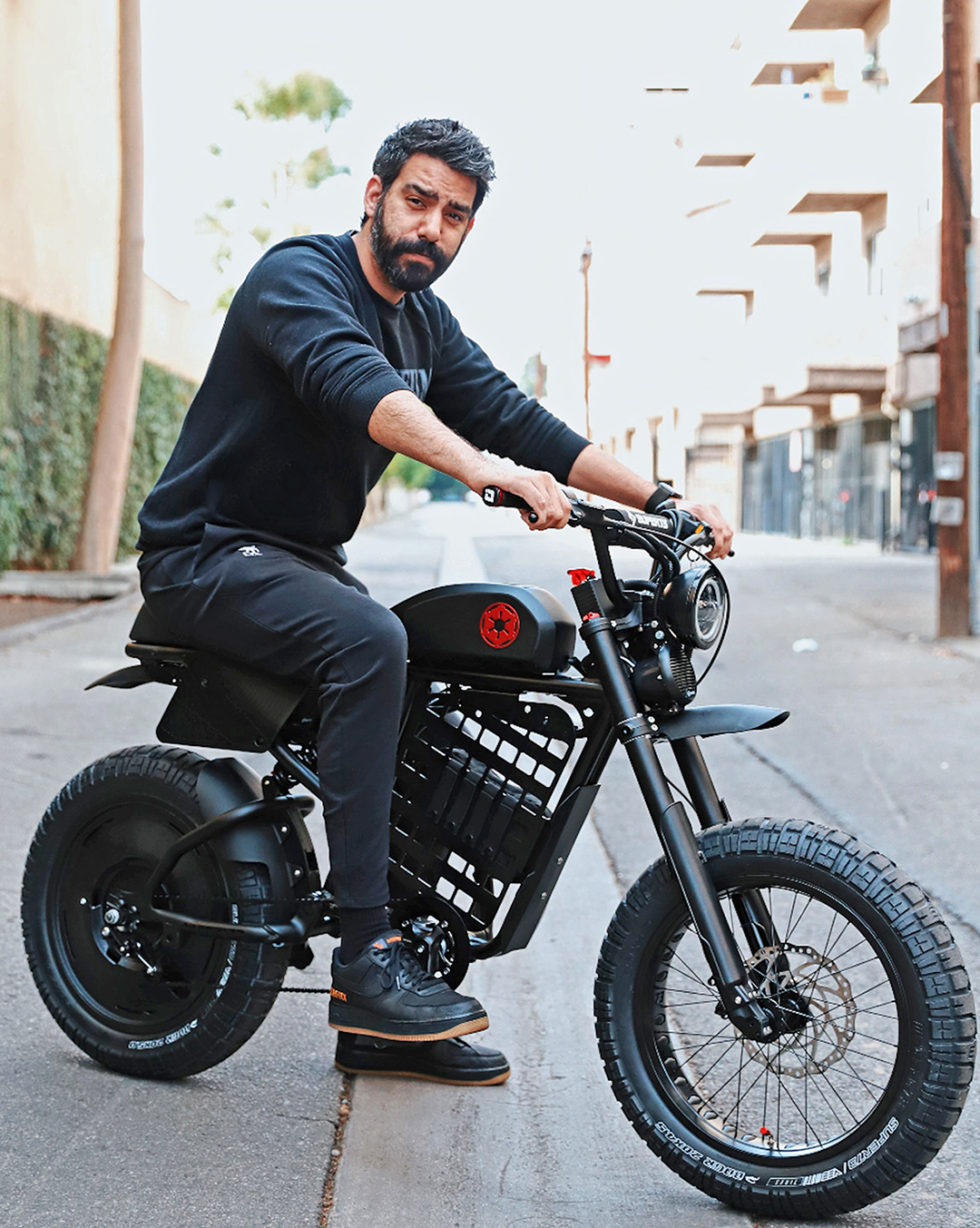 After receiving his custom SUPER73-RX, Kohli said, “I was floored by the style and design. It’s such a beautiful bike and once I turned on the electronics, I couldn’t believe what I was hearing. Riding with those sounds instantly brought me back to being a kid, imagining myself riding across the Tatooine desert, Padawan braid blowing in the wind, scowling and looking for a Tusken raider camp!”  For more information on Super73 and this dope custom e-bike, visit super73.com.

The powersports industry’s top online resource for entertainment and education adds new digital asset to give a voice to all members...